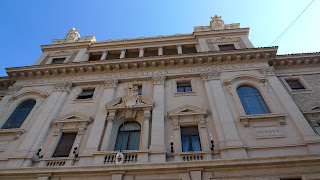 The dissertation could be considered as a theological reflection on the priestly prayer of our Lord -“That they may be one… so that the world can believe” (Jn 17:21), in the context of Christian mission today.

This prayer reveals a cordial will of Christ concerning the common Christian witness in the world and should be earnestly pondered by all who are involved in mission of the Church, both those acting – missionaries, and those thinking – missiologists.

The message of Gospel cannot be genuinely and effectively proclaimed without the unity among those who bear it. Hence mission and ecumenism are two sides of the same reality that lies deeply in the Christian identity.

The conflicts causing the divisions among Christians could be seen to belong to the past history but the motivations leading the Christians together for the sake of mission are something new and characteristic of our days.

The dissertation has been a phenomenological observance on “the signs of times” that give inspiration and orientation to the ecumenical missionary thinking and acting today.

At the outset the Second Vatican Council which states that the division among Christians “openly contradicts the will of Christ, scandalizes the world, and damages the sacred cause of preaching the Gospel to every creature” (UR 1), must be looked at as a principal agent in contributing new breath for a common ecclesiology and missiology. The World Council of Churches (WCC) that “came into being out of the conviction of the churches that the division of Christian is a scandal and an impediment to the witness of the Church” (WCC, Geneva 1982), gives all impetus needed for an ecumenical mission. The third and appealing sign is perceived in the forming process of missiology: This new branch of theology has got its start in an ecumenical context.

In identifying and coordinating these signs of times a trustworthy thinker is needed. David J. Bosch, a Protestant scholar whose life and death were connected with the mission in South Africa is chosen to further the project to its synthesis.

The unique contribution of Bosch for missiology must be his effort to open a new vision toward an ecumenical paradigm for Christian mission in the future. The most important part of the dissertation has been a focus on Bosch’s opus magnum - Transforming Mission, honoured as a kind of Summa Missiologica, in which Bosch with the background as a Protestant theologian and with his deep and well-balanced knowledge of the Second Vatican Council, let the teaching of WCC and Vatican II encounter and sometimes confront with each other in looking for a common foundation for his missiological vision.

Although Bosch deals with all aspects of the missiology, the dissertation has been confined in following him in three main issues: Is it possible for Christians to build up a common missionary ecclesiology? How can they come to a common theology of mission? And which attitude will Christians choose to reach a common interreligious dialogue?

The project has been concluded with a glance over the present context of Norway, where Lutheran Church is national confession and the Catholic Church is a minority church among the other Christian denominations. Would the ecumenical missionary paradigm give any hope for a Norway more Christian?